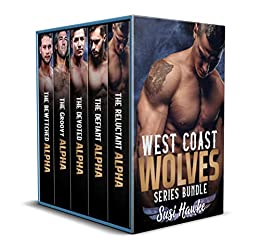 The West Coast Wolves is an mpreg series about a small pack of strong alpha wolves who nobody else wanted… bikers who’ve spent years riding the highways and helping those in need until fate provides them each a pack to lead. This is their complete story in one supersized edition.

Matthias must return to his home pack to save the life of a dying omega… by claiming him as his mate.

Lucian unwittingly rescues his fated mate when he finds a “dying dog” on the side of a highway… and that’s only the beginning. Omegas with special powers, babies stolen at birth and raised in captivity… this one will keep you captivated.

Awkward and recovering from a traumatic childhood, Tom isn’t ready to be claimed by his fated mate. That’s okay, Nick has enough patience and romance to do it right… by courting his mate and giving Tom as much time as he needs to feel ready… even if it takes a lifetime.

An omega raised as a wealthy human in the lap of luxury... A Harley riding alpha who rules a pack of pot-growing wolves in a commune... what was fate thinking?

A determined omega of great talent and an even greater mission... An easy-going alpha with a rootless pack... and a book that will keep you guessing from beginning to end.

Bonus Short: That Time When Rocky Was A Ghost

Don’t miss this standalone bonus chapter at the back of the book!

This 326k edition contains the complete West Coast Wolves mpreg series bundle featuring sweet yet fierce omegas with secret magical abilities, alphas who will do anything for their mates, and more found family than you ever knew you wanted… and all the love, laughs, and feels you’ve come to expect from a Susi Hawke book.