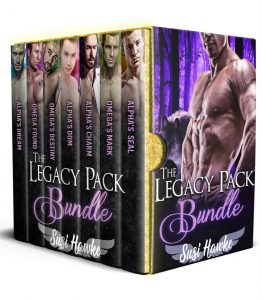 Ages ago, the gods locked away a dangerous, powerful people... but the seal has been broken.The Blood Legacy Chronicles is an mpreg shifter series like you’ve never seen before. The adventurous journey begins in book one where the portal that separates our realm from that of Fae is broken. Over the course of the series, the legacy pack is slowly brought together and given the monumental task of fixing the rift and saving our world before the Fae come back to beguile, trick, maim and kill. A beguiling mix of fun, fantasy, friendship and family, this series will take your breath away. This bundle contains all seven books in this best selling series—all books are fully re-edited, freshly formatted, and guaranteed to give a serious case of the feels. Four brand-new, never been seen epilogues are included to show you what happened in the years after the ending. Note: this series is a spinoff from The Northern Pines Den from the same author.Included:Alpha’s Dream — Seer Clark and Dreamwalker Kent have always known that they were meant to be mates. From their fumbling first time to seeing their powers enfold, you’ll fall in love with this “super duo”... and their trio of superbabies. Omega Found — A halfling omega and his petite Irish alpha fox will charm you and keep you guessing. Omega’s Destiny — The twins of the super duo from book one, Peter and Parker have been having a secret affair. Little did they know they were jumping the gun on what fate had in store for them. The “spideymen” are entrusted with a precious artifact when visiting the phoenix that will put a temporary fix on the portal. Alpha’s Dom — Efficient Jun is an omega dom who isn’t quite sure what to do with the large, african alpha that he’s been gifted by the fates. As for Tau, his lion patiently adores his feisty, little red panda.Alpha’s Charm — This is an mmm. Cody, Ansh and Kontar have to try and stop the evil, unseelie prince who has slipped into our realm and has plans of his own to take over the world—with the help of a vampiric monk.Omega’s Mark — May/December. Sweet, shy Dimi finds himself fated to mate the sexy Aussie alpha, Ethan. Together, they have to fix the problem that was unleashed in book five to do their part of the epic quest.Alpha’s Seal — Hippie omega River and Mark, the quiet wolf from Maine have to figure out how to follow the clue and finally repair the rift in the portal—once they learn to trust each other. These books are all intended for 18+ readers only. They contain adults adulting in naughty, knotty ways and enough potty mouth language to make a sailor blush. Keep an eye out for exhibitionist gargoyles, an adorable phoenix and her faithful brown companion, a powerful goddess, two Fae princes, and a few beloved character appearances from the previous series. This bundle contains the complete series plus bonus epilogues for nearly 200,000 words of fun