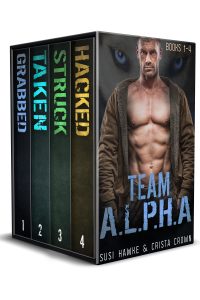 Team leader Noah didn't expect their mission to rescue a bratty kidnapped senator's son to uncover a web of corruption... or to find his mate.

Cody has been held captive for years, his soul beaten so far down, he hasn't tried to escape. Until he finds out he's pregnant. Strong, gentle Levi is shocked to find this wounded omega is his, and together they uncover each others' secrets.

The only thing worse than finding out your mate is your team members' brother? Them discovering you while you're knot deep in... ahem. But not even family strife can keep the team apart, or stop them from taking down evil.

The team has been curious about Jonah's hacker friend Pax for a long time, but no one expected him to suddenly show up in the middle of their headquarters. They definitely didn't expect him to be Zeke's mate. And Pax didn't expect it either. He never planned on mating, but if he's going to do it, it will be on his terms... but Zeke won't submit easily.

But that's not all!

Included with the first four stories of this series are four BRAND NEW epilogues, for more of your favorite team's crazy antics!You can expect to find naughty, knotty scenes of steamy passion, along with a lot of potty-mouth language and occasional violence. Beware of manties, rusty knives, mouthy omegas, and rainbow explosions. HEA definitely included, intended for 18+ readers only. Seriously, would you expect anything less from Susi Hawke and Crista Crown?