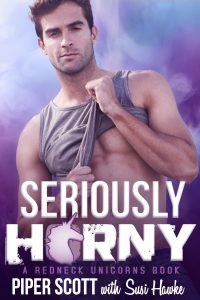 Take one jaded unicorn, add a clueless dragon, throw in some of Mama Vee’s famous ’shine and watch out! Things are about to get seriously h*rny.When a suspicious news report sends tracker Isaiah on the hunt for a missing dragon, he’s expecting to run into trouble... not a college kid with crazy visions who may be his fated mate. Following the suspicious death of his parents and the disappearance of his young brother, Eric’s visions bring him home. If what he’s seen is right, his brother is in danger, and a hunky older stranger, Isaiah, who claims Eric is a dragon might be the only one who can help.Despite the differences between them, if they want to bring Eric’s brother back safely, they’ll have to find a way to work together... and after one hot night leads to more than either of them could have dreamed, the stakes grow higher yet.It’s not only a matter of finding a missing boy anymore—it’s about bringing home their family.Seriously H*rny is a novella-length story in the Redneck Unicorns series. These stories are set several years after the events of the Waking the Dragons series, and while they can be enjoyed as stand-alones, they’re even better as sequels.