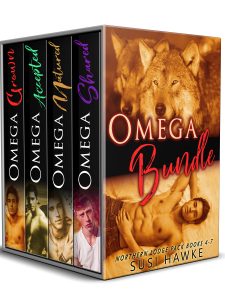 The Northern Lodge Pack series is an mpreg shifter series about found families, finding joy after pain, and the yummy scents of fated mates!The Northern Lodge Pack was founded when one brave alpha and his ragtag group of buddies went on a mission to rescue his twin sister - an omega who was being held as a captive sex-slave by an evil alpha.The Alpha and his buddies found five other omegas in the evil alpha's harem - and rescued them all. Along the way, the omegas are reunited with children they'd birthed in captivity and thought were lost to them forever.This bundle contains the final four books in this best selling series - all books are fully re-edited, freshly formatted, and guaranteed to give a serious case of the feels!Included:Omega Shared - Three Fated Mates! Omega Zane finds himself with one hot fated mate… and then another? Will the pack accept a fated triad between two of their fellow wolves… and a bear? The snarky young omega has a lot of decisions to make when it comes to accepting two alphas as mates. Omega Matured - May/December – Young Luke finds himself being told by pack leader Daniel that they’re fated mates. The trouble is, with a broken nose, Luke can’t scent it for himself. Planner Daniel springs to action with the most romantic wooing the Lodge has ever seen.Omega Accepted - Large Omega Bear meets Small Alpha Wolf. Oskar flees an abusive former relationship to take a job with his bear godfather, Doc Ollie. A one-night stand with a sexy wolf leaves Oskar with decisions to make… could an alpha ever accept an omega who could bench press him with one hand tied behind his back?Omega Grown - May/December - Sassy young omega Ryan is the last of the pack’s original omegas. Finding out the stern school teacher, Ivan, is his fated mate has Ryan wondering if maybe the older alpha bear could finally be the one person to see past his bratty façade. These books are all intended for 18+ readers only. They contain adults adulting in naughty, knotty ways and enough potty mouth language to make a sailor blush. Possible triggers for mentions of past assault, although no scenes of sexual assault are seen.