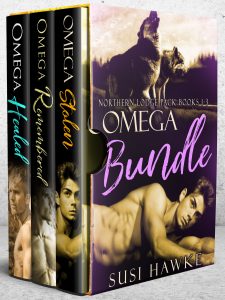 The Northern Lodge Pack series is an mpreg shifter series about found families, finding joy after pain, and the yummy scents of fated mates!The Northern Lodge Pack was founded when one brave alpha and his ragtag group of buddies went on a mission to rescue his twin sister - an omega who was being held as a captive sex-slave by an evil alpha.The Alpha and his buddies found five other omegas in the evil alpha's harem - and rescued them all. Along the way, the omegas are reunited with children they'd birthed in captivity and thought were lost to them forever.This 391 page bundle contains the first three books in this best selling series - all books are fully re-edited, freshly formatted, and guaranteed to give a serious case of the feels!Included:Omega Stolen - Fated Mates! Sold into captivity by his own cruel father, Kai is rescued by the sexy Alpha. Who knew Jake would smell like... his mate. This is the book that started it all. Get ready for a roller coaster of an emotional ride.Omega Remembered - What happens when your worst enemy is also your fated mate?Aries is finally reunited with the two toddlers that were ripped from his arms at birth by the evil alpha. Too bad the alphahole that found them is the last alpha on earth that Aries wants to see... or smell.Omega Healed - Friends... to lovers? Sy knows that his old friend Seth smells like his mate. Seth is sweet to Sy's daughter, sexy AF, and pretty much everything an alpha should be... if one were in the market for an alpha. Before Sy can accept his mate, he first needs to heal from the wounds of the past.These books are all intended for 18+ readers only. They contain adults adulting in naughty, knotty ways and enough potty mouth language to make a sailor blush. Possible triggers for mentions of past assault, although no scenes of sexual assault are seen, also, there is one quite satisfactory scene of the quite violent deaths of two very bad people.