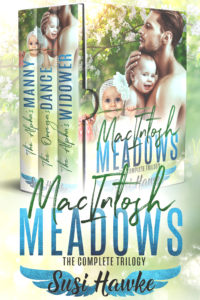 The Alpha’s Widower, The Omega’s Dance, and The Alpha’s MannyThree Books… One Complete Volume!What’s a guy to do when his straight best friend proposes a fake marriage? Just say — Yes!Laurie Adams looked like he had it all, but his marriage was a sham, a Mr. Wrong chosen for all the wrong reasons. When his husband dies, Laurie has no time to mourn the cheating bastard—his children must come first. His only option? Head home to the small farm town he’d left behind a decade ago. The last thing he’s looking for is a fresh start with a new alpha, especially not with Dean MacIntosh… his very straight childhood best friend.Tropes for The Alpha’s Widower: friends to lovers, bisexual awakening, fake marriage, single parentWhat do you do when your one-night stand shows up in your regular life?After a one-night stand in a neighboring town leaves Kade MacIntosh pregnant by an alpha he has no way of contacting, he’s ready to be a single dad. But what the heck is he supposed to do when Mr. Hot Stuff shows up in his dance studio? Alec Santiago is hard enough for Kade to resist, but his heart is no match for Alec’s adorable daughter.Tropes for The Omega’s Dance: single parent, surprise baby, one-night stand shows up in real lifeWhat’s an omega to do when denied custody of his late sister’s baby? Take the job offered to be his manny!Zeke MacIntosh gets the shock of a lifetime when he’s contacted by social services to let him know that a former one-night stand gave birth to his son… and never told him. When Zeke goes to meet his baby, he’s also introduced to a down-on-his-luck omega—who’s not only in the market for a job, but is also the baby’s maternal uncle, and a perfect manny candidate. Never one to think before he speaks, Zeke spontaneously hires Dusty and invites him to live in their home.Tropes for The Alpha’s Manny: finding joy after loss, making a family, surprise baby, manny, and a smidge of enemies-to-lovers.

Spend a little time with the MacIntosh clan. Featuring three brothers finding love while dealing with pushy grannies, multiple pregnancies, cute babies, and kids being kids—this trilogy will hit you in the feels and leave you smiling. No new material has been added. This bundle contains all three full-length books in one handy volume.