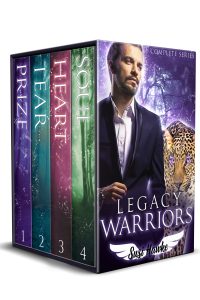 Their parents were the ones to seal the portal that separates our world from the realm of the Fae. The goddess has a new job for this generation of legacy descendants… but first, she has a few tasks for them.The Legacy Warrior books are an mpreg shifter series that follows the adult adventures of the children born in the The Blood Legacy Chronicles. Their journey begins in book one where the first couple wake after mating to find themselves being drafted by the goddess Artio to help her uncover an ancient artifact. Over the course of the series, the main couples, or legacy warriors, are given a series of four tasks that will enable them to do the job that the goddess has longed planned for their futures. A beguiling mix of fun, fantasy, friendship and family—this series will take your breath away.This bundle contains all four books from this best-selling series. Five brand-new epilogues have been included to show you what happened after the fighting ended and the real adventure of living happily ever after began. Note: this series is the fourth spinoff in the world that began with The Northern Lodge Pack also from this same author.Included:Prize — Alpha jaguar Connor is one of a set of powerful, psychic triplets. He has always known that his friend Oni, a feisty omega lion shifter, is destined to be his mate. From their sexy first time to being tasked with a mission from Artio, this pair is off on a wild adventure across the globe… while Connor tries not to incur the wrath of his diminutive, omega father-in-law, Jun.Tear — Jon, one of the all-powerful triplets, is a wild-child who’s just waiting for the day that his predestined mate catches his scent. Jude, a laid-back coyote shifter, is thrilled to be with Jon. He’s not quite as happy about his pregnant mate having to fight an unknown evil while they handle the goddess’ second task.Heart — Sammy, although one of the triplets, constantly second-guesses himself. The only thing he doesn’t doubt is that the loud, life of the party, alpha leopard Kyle is meant to be his mate. While on their honeymoon, they rescue a pair of cheetah cubs—shifter children stuck in fur form. They have to deal with their task for the goddess, take care of the cubs and figure out where they came from—all while Sammy is pregnant himself. Soul— Toby is a large alpha bear who’s been cursed with clumsiness. While his family and friends all lovingly tease him, his fated mate and best friend staunchly defends him. Aaron, a vegan wolf shifter, is one of the few members of the pack with no psychic gifts… or is he? Toby and Aaron have a hefty task in front of them as they race to complete the final task and defy the ancient being trying to stop them at every turn, while also dealing with a surprise pregnancy.These books are all intended for 18+ readers only. They contain adults adulting in naughty, knotty ways and enough potty mouth language to make a sailor blush. Keep an eye out for a broken boner, fun-loving gargoyles, a powerful goddess and her playful Fae lover, and more than a few beloved character appearances from the previous series. This bundle contains the complete series plus bonus epilogues for over 100,000 words of fun.Note: This is the fourth series set in the same universe. Each series can be read on its own, but if you want to read the world in its entirety, the suggested series reading order is: The Northern Lodge Pack, The Northern Pines Den, The Blood Legacy Chronicles, and finally, Legacy Warrior.