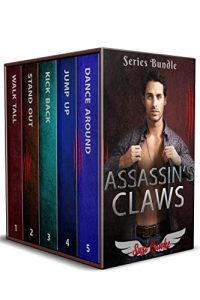 Watch out for the Assassin’s Claws…

Five Portuguese cat shifter brothers… paid killers who only target society’s worst targets, probably shouldn’t be as downright fun to spend time with as these ones. It’s the family business—they fight together, they die together.

Whether they’re working as a group or alone, the Moreno brothers are a tight unit who protect their own. Are there dark scenes where bad guys get what’s coming to them? Absolutely. There are also way too many moments of absurd hilarity, hijinks and pure joy. And there’s the ninja bunnies…

This bundle includes all five books of the Assassin’s Claws series in its entirety, 177k words in total, so get ready to settle in and binge a series that will keep you on the edge of your seat, turning pages and laughing. Books included:

Walk Tall—Clay Moreno is hired to assassinate the American president. He knew the case was going to be tough, but the last thing he expected to find was his mate… the president’s own son.

Stand Out—Introverted omega Gib Moreno is a stealthy assassin who’s far from thrilled to find his true mate while on a job. Especially when his mate is someone as loud and well-known as HRH Prince Partypants.

Kick Back—Ginger-haired omega Dear Moreno is known for two things: his sassy wardrobe and his snark. Wanting to find out who wants a priest taken out, Dear never expects to discover the priest is his true mate.

Jump Up—When the brothers are tasked to rescue an pregnant, imprisoned omega, Nash Moreno is shocked when he’s his true mate.

Dance Around—Dan Moreno scented his true mate two decades earlier… and ruined his chance, creating an enemy instead. Forced to work together, their secret is out and both of their families are calling them idiots.

Note: While mpreg exists in this world, there isn’t a birth in every book. But what every book does have is killer cats, ninja bunnies and life-changing mating bites. Get ready for naughty-knotty fun and low-ball humor as only Susi Hawke can provide.