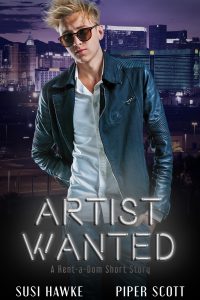 This is a short story from the Rent-a-Dom universe by Susi Hawke and Piper Scott. Cecil is a sassy, British twink of an omega, now living in Las Vegas and although quite pregnant, has been resistant to settling down with his alpha boyfriend, Michael. He doesn't think a surprise pregnancy should push their relationship to move faster, but... he wouldn't mind having his man there full-time. Especially now that he's so far along and will soon have a baby to care for.A fun anniversary outing turns into a kinky show in a leather club that has to be seen to be believed. Be prepared for a side-splitting laughter and a steamy 'scene' with one completely trussed-up alpha who's at his omega's mercy.