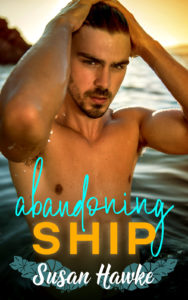 When the seas of love grow choppy, sometimes the best course is to abandon ship!Two years ago, Ryan Abernathy was too tongue-tied, too introverted, and entirely too nervous to flirt with his hot but presumably straight new roommate. So when Ryan’s sister swooped in and scooped the hottie up for herself, he accepted his fate and kept his crush a secret.Sawyer Muller never meant to find himself in a fake relationship with his sexy roommate's sister. And how was he supposed to know that Ryan would become his bestie and star in way too many of his dreams?Things get complicated when Julia Abernathy strikes a deal with Sawyer to upgrade from fake boyfriend to groom, though they only need to stay married long enough for her to get her trust fund. They plan a fun cruise ship wedding with her entire family in tow. Sawyer figures it sounds like an adventure, and when they quietly divorce later, he’ll finally be free of all the pretense.With Julia and Ryan’s homophobic, snooty family present, the pressure is turned up… especially when Sawyer finds himself jilted at the altar and drowning in a sea of blame from her family. His only life preserver is the Abernathy sibling he can’t admit to wanting… Ryan.This is full-length mm romantic comedy will keep you in stitches. Watch out for an awkward first kiss, a record-making group wedding, and sexy competitive shuffleboard. Before you board this ship, make sure you pack a fan because things are about to heat up on board this vessel!